Age-related mobility impairments resulting from progressive movement limitations pose societal and economic burdens on our population. Ageing is accompanied by loss of physical properties such as muscle strength and power, bone health, and (joint)pain, for which elderly develop coping mechanisms in their movement strategies. Furthermore, movement strategies are influenced by preferences in movement objectives, in terms of avoidance of risk (stability, speed) and pain, as well as energy efficiency. However, scientists and clinicians do not yet fully understand the effects of decline of each individual physical property and movement objective, on the movement strategies of elderly, since only their combined actions can be observed. Therefore, it is unknown how much decline of each variable can be tolerated before daily activities become impaired, which impedes developments of (preventive) therapies. The aim of my study is to determine these individual and combined effects of decline, using a dynamic computational model that can quantitatively predict (simulate) how human movement strategies change as a result from progressively changing age-related physical properties and movement objectives. I will develop predictive neuro-musculoskeletal models adjusted to ageing to perform these simulations. My models can support clinicians in prescribing more effective and efficient treatment to prolong mobility in elderly.

Stage 1: Development of musculoskeletal (MSK) models of elderly To apply and develop a forward dynamic framework for the simulation of elderly, I will develop an ageing model of the decline for separate physical variables.

{The following is adopted from our article: “CaReMoOC: Capacity, Reserve, Movement Objectives, and Compensation. A new framework to describe mechanisms of movement limitations, demonstrated for ageing.” which is currently in review at European Reviews of Aging and Physical Activity}

Our locomotion system is made up of our neural, muscular, and skeletal system. Over the course of our life we develop these systems, building our neuromusculoskeletal capacity. This increase in capacity can be compared to charging a battery (a capacitor). Charging a battery requires an active source, which is comparable to an active lifestyle. The time it takes to charge the battery is determined by environmental effects and lifestyle choices such as nutrition, drug and/or alcohol use, and illnesses (resistors), and our genetics (capacitance value). Genetics together with the active source determine the maximum amount we can charge our battery (capacitor value). 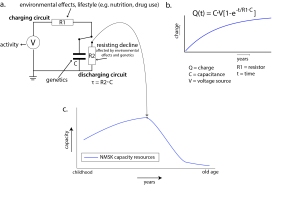 Decline of neuromusculoskeletal (NMSK) capacity is a result of structural changes of the neural, muscular, and skeletal (including soft tissues) systems. The onset of this decline is different between people and between elements of our capacity but starts already in our mid-twenties.

We usually don’t notice the onset of capacity decline as our bodies are redundant. Reserve is the difference between our capacity and the task demand. As task requirements vary over the duration of the task, so does reserve, therefore, inability may occur for only a portion of the task. Within the redundancy of capacity and reserve, humans both consciously and unconsciously decide on movement strategies. The applied motion strategy of humans considers metabolic energy, speed, safety (e.g. stability margins), and/or pain avoidance, which will be jointly referred to as the movement objectives. For example, an Olympic speed skater wants to win the race and consciously puts most emphasize on velocity, ignoring pain. However, in daily life, we walk at a speed that is as energy efficient as possible, to increase endurance. The movement objectives and their relative weighting are a multi-objective function determining the most effective strategy. Humans make comparative assessments of movement objectives based on the task goal, their capacity, and psychological reasons such as fear of falling, pain, or an unknown environment.

A compensatory movement strategy is defined as compensation in relation to a baseline (e.g. previous state or a control group). Two levels of compensation are:

In my model I incorporate changes in the muscular system and the neural system by changing the parameters of the model. The hearing, visual, and vestibular system are currently not incorporated. The changes in the skeletal system are represented by altered weighting of movement objectives: cartilage degeneration results in joint pain, whereas bone mineral density and morphological changes result in increased fear of falling (emphasize on stability) due to the increased consequences of a fall. Moreover, altered body mass distribution and reduced joint range of motion are incorporated in the parameters of the model. 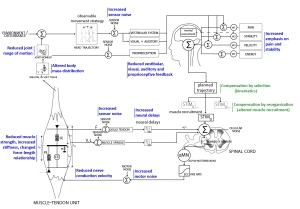 Stage 2: Use predictive simulations to determine the effect of ageing mechanisms on movement strategy The ageing musculoskeletal model will be implemented in existing forward simulation platforms (OpenSim, Scone).

{The following is adopted from our article: “The effect of ageing on the standing up movement analysed using the Capacity, Reserve, Movement Objectives, and Compensation (CaReMoOC) framework” which is currently in review at European Reviews of Aging and Physical Activity}

Prolonging independence for older adults is a major concern for our ageing societies (UN, 2019).  One of the more important movements in daily-life is standing up, for example, getting up from a chair, getting out of bed, or leaving the toilet. When standing up can no longer be performed independently, then in-home care or moving to a care facility is required. There are moderate relationships between strength and rising strategy, however, it is also clear that strength is not the only contributing factor. Most experimental studies have studied this movement in restricted experimental set-ups (no arm aid, symmetric foot positioning, standing still after standing up), not allowing for compensation strategies. Moreover, most studies looked at isolated variables of capacity (mostly muscular, neglecting neural and skeletal decline), therefore other relevant factors that might interact with the compensation strategies identified in these studies cannot be ruled out.

{The following are preliminary results from the predictive simulations; the optimizations are still ongoing}
Predictive neuromusculoskeletal models can quantitatively predict (simulate) how human movement strategies change as a result from progressively changing age-related physical properties and movement objectives. This work is in progress, but the first steps have been taken.

The musculoskeletal model is based on an opensource lower limb model [2], [3]. The model represents a male adult with approximate height of 1.80 m and a mass of 75.16 kg. The model has a 3 degrees of freedom (dof) joint between the pelvis and the ground, a pin joint (1-dof) at the hip and ankle, a 1-dof joint at the knee with coupled rotation and translation, and a 1-dof pelvis joint (between the pelvis and the torso), resulting in a 10-dof model. The model is actuated using 22 Hill-type muscle-tendon units (MTU) [4], 8 per leg, and 3 per side on the HAT. This reduction in number of muscles was done by combining muscles with similar functions in the sagittal plane into single MTUs with combined peak isometric forces to represent 11 major muscle groups: gluteus maximus (GMAX), biarticular hamstrings (HAM), iliopsoas (ILIOP), rectus femoris (RF), vasti (VAS), gastrocnemius (GAS), soleus (SOL), tibialis anterior (TA), erector spinae (ERCSPN), internal abdominal obliques (INTOBL), and external abdominal obliques (EXTOBL).

Contact force between the feet and the ground and between the buttocks and the chair were modelled with  Hunt and Crossley force spheres [7], [8]. Each foot had two contact spheres representing the heel and toes, each with a radius of 4 cm. The pelvis had two contact spheres of 10 cm representing the buttocks. The chair was also represented as a sphere with a radius of 15 cm, as modelling the chair as a platform (ContactHalfSpace) would have resulted in an infinite area in the simulation software OpenSim.

Optimization was done with an evolutionary strategy called Covariance Matrix Adaptation Evolutionary Strategy (CMA-ES) with a rank-μ update. For the STW controller there were 155 design variables (gains, offsets, transition parameters). The number of iterations was dependent on the simulation time. In line with previous studies [9], we have run multiple parallel optimizations with the same initial guess and used the best set as start the next set of optimizations.

The simulations are currently running different initial positions and the experimental data (see Stage 3) is used to verify the simulations using kinetics, binary muscle excitation, and timing of the excitation.  Next, the model will be aged to look into age-related compensation strategies.

On Friday Nov 8th 2019 we had our 50th, and for now last, participant in the lab for our 4-hour motion caption study for validation purposes. Next step is to process all these data and analyse the results!

Stage 4: Visualization of the optimizations Since the scope of my project is aimed at the clinical applicability of the results, I will visualize the results in an online open-source interactive user-interface visualization tool applicable for clinical specialists